Pick a number, any number, and write it down.  For example:

By following this process, you have created an “Arithmetic Sequence”, a sequence of numbers that are all the same distance apart when graphed on a number line:

In the example above 5 is the first term, or starting term, of the sequence. To refer to the starting term of a sequence in a generic way that applies to any sequence, mathematicians use the notation

This notation is read as “A sub one” and means: the 1st value of the sequence represented by “a”. The one is a “subscript” (value written slightly below the line of text), and indicates the position of the term within the sequence.  So

represents the value of the first term of the sequence (5 in the example above), and

represents the value of the seventh term of the sequence (23 in the example above).

Since all of the terms in an Arithmetic Sequence must be the same distance apart by definition (3 apart in the example above), the magnitude of this distance is given a formal name (the common difference) and is often referred to using the variable

(for Difference). If you add this value to any term, you end up with the value of the next term.  It can be calculated by subtracting the previous term from any term:

Every Arithmetic Sequence has a common difference between consecutive terms.  Examples include:

The common difference can be positive or negative. It can be a whole number, a fraction, or even an irrational number. No matter what value it has, it will be the difference between all consecutive terms in that Arithmetic Sequence.

Algebraic Description Of An Arithmetic Sequence

The existence of a common difference (

) allows us to calculate terms in a generic way:

Since every line above follows the same pattern, the whole process can be described a bit more generally and compactly by using a variable as a subscript:

This would be read as “A sub N is equal to A sub N-1 plus the common difference d”. If

refers to the “Nth” term, then

has a subscript that is one less than N, and therefore refers to the term that immediately precedes

. A more intuitive way of reading this equation is “Any term may be calculated by adding the common difference to the previous term”.

These insights allow a complete description of an Arithmetic Sequence to take a number of forms:

Specify the first term and the common difference

Specify the first term, with a rule to get you from each term to the next
This is a “Recursive” definition (you must know the previous term)

Note that if a sequence starts with a 5 then increases by 3 from one term to the next, this situation can be modeled using a linear equation with 5 as its y-intercept and 3 as its slope (with the domain restriction that “n” must be a positive integer). The last equation above uses this linear model, and provides the fastest way to calculate the Nth term of the sequence. Generalizing this linear equation approach leads to a description that applies to any Arithmetic Sequence:

If you know the first term of a sequence (

), how many common differences do you need to add to it to get to the second term of the sequence (

)? Since you seek the very next term, only one difference is needed:

How many common differences are needed to get from the first to the third term?

in order to arrive at the Nth term.

How many possible “unknowns” does the equation for

What is the common difference? (Solve for “d”)

To answer one of the above questions, you must know (or be given enough information to determine) values for three of the “unknowns” in the equation above.  For example, if you are told that

is 24, so you know two of the three bits of information you would need to answer a question about this sequence. Most Arithmetic Sequence problems can by solved by:

Some problems will be a little more complex, but you should still be able to use the information provided to determine values for three of the four unknowns.

For example, suppose the only information that a problem provides are values for  the 10th and 15th terms. You can find “d” either by a) taking the difference between the two terms and dividing it by 5 (the number of common differences needed to get from the 10th to the 15th term), or b) treating the 10th term as

, then using the equation for

Arithmetic Sequences can be thought of as linear equations with their domains restricted to integers. So they can model any situation that includes a constant rate of change, but where the only inputs that make sense are integers. Examples include:

The Nth term of a “series” is the sum of the first N terms of its underlying sequence.

Consider the Arithmetic Sequence described at the beginning of this post:

The series based on this sequence is:

The 3rd term of the Series is the sum of the first three terms of  the underlying sequence, and is typically described using Sigma Notation with the formula for the Nth term of an Arithmetic Sequence (as derived above): 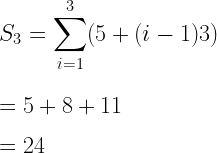 Formula for the Nth Term

The difference between successive terms in this sequence (“d”) is always 3 . What happens when, instead of adding the first two terms together, we add the pair of terms on outside first, then the next pair of “in” from them, etc.:

How Does This Pattern Lead To A Formula?

Three insights lead us to a formula for the sum of an Arithmetic Sequence.

1) Why do the above pairs always add to the same number? Think about the second pair that was added above:

The two differences of three (one positive and one negative) cancel each other out, and the sum of the second pair will be the same as the sum of the first pair. This will be true for any Arithmetic Sequence (if you substitute “d” for “3” above).

)? Consider what would happen if we were looking at the first seven (an odd number) terms of the sequence… there would be a term “left over” after we have paired off as many terms as we could, with each pair having the same sum as all the other pairs (28 in this case):

If there are an even number of terms, there won’t be a “middle” term but every pair will still have the same sum, and therefore the same average (equal to half their sum). Therefore the sum of each pair, the quantity that ended up always being 25 or 28 above, will always be twice the average of the first “n” terms in the sequence.

Multiplying both sides of this equation by the Number of Terms produces:

This provides an easy way to calculate the sum of the first “n” terms of an Arithmetic Sequence. Since we now know that

we can multiply it by “n” to arrive at a simple formula for the sum of the first “n” terms of any Arithmetic Sequence:

is usually used to represent the value of the Nth term of an Arithmetic Sequence, while

(S for Sum) is usually used to represent the value of the Nth term of an Arithmetic Series.

. So the four types of questions that are typically asked are:

What is the Nth term of the underlying Arithmetic Sequence? (Solve for

To answer one of the above questions, you must know (or be given enough information to determine) values for three of the “unknowns” in the equation above.  From there, algebra skills should get you to an answer for the question.

– The total number of seats in a fan-shaped auditorium, where each row has a two more seats than the previous one