For the approach I now prefer to this topic, using transformation equations, please follow this link: Function Transformations: Translation

A function has been “translated” when it has been moved in a way that does not change its shape or rotate it in any way. A function can be translated either vertically, horizontally, or both. Other possible “transformations” of a function include dilation, reflection, and rotation.

In the text that follows, we will explore how we know that the graph of a function like

which is the blue curve on the graph above, can be described as a translation of the graph of the green curve above:

makes it easier to understand and predict its behavior, and can make it easier to describe the behavior of complex-looking functions. Before you dive into the explanations below, you may wish to play around a bit with the green sliders for “h” and “k” in this Geogebra Applet to get a feel for what horizontal and vertical translations look like as they take place (the “a” slider dilates the function, as discussed in my Function Dilations post).

Consider the equation that describes the line that passes through the origin and has a slope of two:

has three added to it? The function

is defined as the result of

with three added to each result. If we then substitute the definition of

Adding “+3” to the definition of

causes the entire function to be “translated vertically” by a positive three.

This process works for any function, and is usually thought through in the reverse order: when looking at a more complex function, do you see a constant added or subtracted? If so, you can think of it as a vertical translation of the rest of the function: 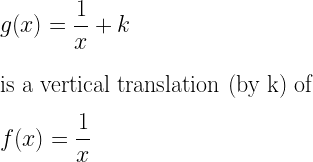 Consider the same function described at the beginning of the Vertical Translation section, which describes a line that passes through the origin with a slope of two:

What happens to the graph of this equation if every “x” in the equation is replaced by a value that is 4 less? We can describe this algebraically by evaluating

, and let’s call this new function

Now let’s compare the behaviors of

produces the same results as

, but only when its input values are four greater than the input to

. Comparing the graphs of the two functions, the graph of

will have the same shape as

, but that shape has been shifted four units to the right along the x-axis.

A helpful way to think about the above (thanks to Michael Paul Goldenberg’s 2016 comment below) is to think of the independent variable “x” as measuring time in seconds. Therefore, “x-4” is 4 seconds earlier then “x”, and evaluating

produces a result from 4 seconds earlier than time “x”. When we graph

, all of the results will appear to be 4 seconds later (to the right) than those on the graph of

The fact that substituting “x-4” for “x” produces a horizontal translation of +4 (not -4) is a source of errors when people get horizontal and vertical translation behaviors confused. One way to address this is to use a procedural approach whenever you see a variable with a constant added or subtracted (often together in a set of parentheses). To find the direction of the translation, set the transformation expression equal to zero and solve:

The result will always give your the magnitude and direction of the translation (see Keep Your Eye On The Variable). This process works for any function:

and solve for x. The graph of

translated horizontally by -3. Or for

translated horizontally by -5. Note that

requires every instance of “x” in

to have (x+5) substituted for it. So a function like

will only be a horizontal translation of

if every instance of “x” has the same constant added or subtracted. The notation

expresses this idea compactly and elegantly. 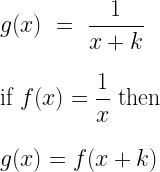 so the graph of

translates a function in a positive vertical direction, yet

translates the function in a negative horizontal direction.

This apparent difference in the way we analyze horizontal and vertical translations can be reconciled by treating both independent and dependent variables in the same manner. If

and we subtract 7 from both sides, it becomes:

Since every instance of

, and every instance of “x” occurs as

, you may treat both

and “x” as having been translated relative to a parent function, and you may analyze them both in exactly the same manner:
– what value of

? Positive 7. So the translation in the

direction, along the vertical axis, is positive 7.
– what value of “x” makes

? Negative 5. So the translation in the “x” direction, along the horizontal axis, is negative 5.

Therefore, if we define

as shown below, a

In mathematics, it is often (but not always) possible to produce the same end result in different ways. When working with linear equations and using the approach described in the last section above, you may have wondered how to handle a situation such as:

The above describes a horizontal translation by +4, but if we subtract 4 from both sides the equation becomes:

which describes a vertical translation by -4. Are they both valid interpretations?

Since both of the above are valid algebraic manipulations of the same equation, they must both have the same graph. Imagine the graph of

, which will be a line with a slope of one that passes through the origin. Now translate the graph vertically by +4. This translation will also cause the x-intercept to move… four to its left.

Equivalent translations do not always translate by the same distance. If the slope of the line is not 1, we need to translate by different amounts:

The first representation of

above is a horizontal translation of

by +2, while the last one is a vertical translation by -4. Yet, they both describe the same graph. We could be even trickier if we wished to:

Just as there are often multiple ways of describing something using English, a particular situation can often be described in more than one mathematically too.