, is a capital letter in the Greek alphabet. It corresponds to “S” in our alphabet, and is used in mathematics to describe “summation”, the addition or sum of a bunch of terms (think of the starting sound of the word “sum”: Sssigma = Sssum).

The Sigma symbol can be used all by itself to represent a generic sum… the general idea of a sum, of an unspecified number of unspecified terms:

But this is not something that can be evaluated to produce a specific answer, as we have not been told how many terms to include in the sum, nor have we been told how to determine the value of each term.

Sigma notation, or as it is also called, summation notation is not usually worth the extra ink to describe simple sums such as the one above… multiplication could do that more simply.

Sigma notation is most useful when the “term number” can be used in some way to calculate each term. To facilitate this, a variable is usually listed below the Sigma with an equal sign between it and the starting term number. If this variable appears in the expression being summed, then the current term number should be substituted for the variable:

Note that it is possible to have a variable below the Sigma, but never use it. In such cases, just as in the example that resulted in a bunch of twos above, the term being added never changes:

The “starting term number” need not be 1. It can be any value, including 0. For example:

That covers what you need to know to begin working with Sigma notation. However, since Sigma notation will usually have more complex expressions after the Sigma symbol, here are some further examples to give you a sense of what is possible: 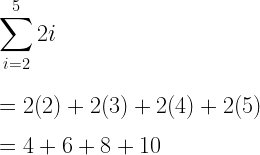 Note that the last example above illustrates that, using the commutative property of addition, a sum of multiple terms can be broken up into multiple sums: 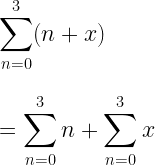 And lastly, this notation can be nested:

The rightmost sigma (similar to the innermost function when working with composed functions) above should be evaluated first. Once that has been evaluated, you can evaluate the next sigma to the left. Parentheses can also be used to make the order of evaluation clear.

, is a capital letter in the Greek alphabet call “Pi”, and corresponds to “P” in our alphabet. It is used in mathematics to represent the product of a bunch of terms (think of the starting sound of the word “product”: Pppi = Ppproduct). It is used in the same way as the Sigma symbol described above, except that succeeding terms are multiplied instead of added:

To make use of them you will need a “closed form” expression (one that allows you to describe each term’s value using the term number) that describes all terms in the sum or product (just as you often do when working with sequences and series). Sigma and Pi notation save much paper and ink, as do other math notations, and allow fairly complex ideas to be described in a relatively compact notation.