This post assumes you already familiar with analyzing function translations. Even if you are, reading Function Transformations: Translation may be a useful introduction, as it uses this same approach to understanding transformations. Note that
– Translations move a graph, but do not change its shape
– Dilations change the shape of a graph, often causing “movement” in the process

The red curve in the image above is a “transformation” of the green one. It has been “dilated” (or stretched) horizontally by a factor of 3. A dilation is a stretching or shrinking about an axis caused by multiplication or division. You can think of a dilation as the result of drawing a graph on rubberized paper, stapling an axis in place, then either stretching the graph away from the axis in both directions, or squeezing it towards the axis from both sides.

Transformations are often easiest to analyze by focusing on how the location of specific  points on the curve have changed. In the image above, the point

on the green curve “corresponds” to point

on the red curve. By this we mean that the transformation has moved point

on the green graph to be at

on the red graph.

In looking at the coordinates of the two corresponding points identified in the graph above, you can see that the y-coordinate has not changed and the x-coordinate has been stretched to be three times further away from the y-axis… changing the shape of the curve in the process. If you were to examine any other pair of corresponding points, you would see the exact same scaling factor at work. This can be described algebraically by the equation:

is the starting x-coordinate from a point on the green curve, and

is the dilated x-coordinate from the corresponding point on the red curve.

Have you noticed that one value of x was not changed by this horizontal dilation? Which

value is identical to its transformed

value based on the equation above? Looking at the graph may help: what point do both the green and red curves have in common?

Points that lie on the axis perpendicular to the direction of dilation will not move. Since their coordinate on the other axis is zero, multiplying this value by the dilation factor will leave the coordinate at zero, and the dilated point will be the same as the original point.

The green curve above is the graph of the equation:

, then substitute for those variables in equation (2).

is already solved for, so we only need to solve for

and the system of transformation equations is now ready for substitution:

Substituting this system into (2) produces:

Notice that the process of solving for

in the transformed equation.

When dilation factors are coefficients of the variable they affect (as opposed to on the other side of the equation), they will be the reciprocal of the dilation factor.

Look at the coordinates of the corresponding A points on the green and red graphs above. The x-coordinate has not changed, but the y-coordinate has been stretched to be three times further away from the x-axis. If you were to examine any other pair of corresponding points, you would see the exact same relationship. This can be described algebraically by the system of transformation equations:

is the starting y-coordinate from a point on the green curve, and

is the dilated y-coordinate from the corresponding point on the red curve. The x coordinates do not change, and thus are set equal to one another.

Note once again that one point does not move in this dilation… the one shared by both graphs: the origin. Since it is on the x-axis, a vertical dilation does not move it.

The green curve is the graph of the equation:

and the system of transformation equations becomes:

Substitute the results into (2) to produce an equation for

Notice that the process of solving for

in the transformed equation. If this equation is then solved for

The last equation above can be interpreted as the original result of the function,

, with every result stretched to be three times farther away from the x-axis. To summarize, dilation factors appear:

A negative dilation factor will cause the graph to be reflected about an axis, as well as stretched or compressed.

For the vertical dilation example above, if the dilation factor had been -3 the resulting graph would have opened down (been reflected about the horizontal axis) and been stretched to have every point be three times further from the x-axis.

The example below includes a negative dilation factor.

The image above shows the result of two dilations. The green curve has been dilated both horizontally and vertically to produce the red curve. Looking at the coordinates of the corresponding point A, you can see that it has been stretched horizontally by a factor of three, and vertically by a factor of negative two. Algebraically, this can be described by the system:

Looking at the two corresponding points from the graph above, (1,1) is the “A” point on the green curve, referred to generically as

in the system of translation equations above, and (3, -2) is the corresponding dilated point represented by

in the system of transformation equations above.

Solving both equations for the “original” (green) curve variables produces 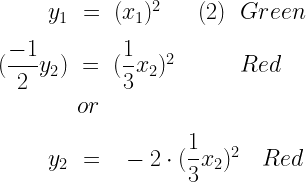 The graph above shows a different green function than all the previous examples, in that the green curve does not intersect the x-axis. It does intercept the y-axis. The red curve is a dilation of the green, by a factor of 3 horizontally, and a factor of -2 vertically. You can use the corresponding points labelled A to verify these vertical and horizontal dilation factors.

Notice that the red curve appears to have “moved” when compared to the green one, as the two curves do not share any points. Yet no translation was involved, because nothing was added or subtracted to the original coordinates. The dilation process, by stretching a curve away from an axis, can appear to “move” the curve as part of the stretching process… particularly when the curve does not cross the axis it is being stretched away from.

When using substitution, all instances of the variable being substituted for must be replaced. The same applies when dilating a function. For example, if are working with a function that has multiple x terms, such as

and dilating it horizontally by a factor of 4

then every instance of

must have the dilation equation substituted in its place

So, when analyzing one function to see if it a dilation of another, check that every instance of each variable has had the same transformation equation applied before asserting that the function is a transformation!

y2 does not describe a horizontal dilation of y1, because the “x” term did not have the same transformation equation substituted for it as the “x squared” term did.

In mathematics, it is often (but not always) possible to produce the same end result in different ways. When working with quadratic equations and using the approach described above, you may have wondered how to handle a situation such as:

The above describes a horizontal dilation of

by a factor of

, but if we expand and solve for x the equation becomes:

which describes a vertical dilation by a factor of 4. Are they both valid interpretations?

Since both of the above are algebraic manipulations of the same equation, they must both have the same graph.

Examine the graph of

in green above, focusing on the point (1,1). Think about what happens to the x-coordinate of the point as the curve is dilated horizontally by a factor of

Now think about that same (1, 1) point on the green curve, and what would happen to it if the curve is dilated vertically by a factor of 4. Its y-coordinate would become four times larger, moving the point to (1, 4)… which also lies on the red curve.

So both approaches end up being equivalent: they transform the entire green curve into the red one, one by squeezing horizontally, the other by stretching vertically.

Note also that equivalent dilations will not exist for every curve. Asymmetrical curves generally won’t have two ways of producing a given dilation, so this is a bit of a special case.

Just as there are often multiple ways of describing a specific situation using words, math can often also describe something in multiple ways.

To apply your knowledge of both translations and dilations, check out the next article in this series: Using Corresponding Points to Determine Dilation Factors and Translation Amounts