Adding a squared term to a linear expression, creating a quadratic expression in the process, seems like a relatively small change:

Yet, if this new term is part of an equation, the procedures that worked nicely when solving linear equations don’t work so well any more. Investigating what happens in such situations is useful, and leads to some new concepts and procedures.

If a quadratic equation is approached in the same way as a linear equation, it can sometimes be solved quickly:

Familiarity with square roots and how to solve linear equations are enough to solve this equation. By getting the variable all by itself on one side, the two possible solutions to the original equation are left on the other.

However, the following equation cannot be solved in the same way: 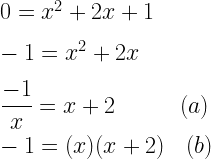 This equation has two “x” terms, and they are not “like terms” since one has the variable to the first power and the other to the second power. If a linear equation approach is used, moving the constant term to the other side, two un-like terms are left on the right… but what to do from here?

If both sides are divided by “x”, as was done in step (a) above, the equation gets worse: there are now variables on both sides of the equation, one in the numerator and one in the denominator. That would seem to make it impossible to gather them into a single “x” term, as needed to solve for “x”.

If an “x” is factored out of both terms, as was done in step (b) above, we are left with a product of two factors equal to negative one, which could have an infinite number of potential solutions. In the example above, where the two numbers must differ by 2, you can probably solve the problem intuitively… but we want an algebraic process that is guaranteed to solve any such problem.

So, let’s step back and re-think the situation. Are there other approaches that could be used?

Think about the following generic situation:

This equation states that the product of two numbers is a constant. Can anything be determined about the two numbers? Can the range of possible values for them be narrowed in any way? Aside from noting that each pair of numbers would have to share the same sign if the constant is positive, there are still an infinite number of pairs of real numbers whose product is six .

However, a slight variation of the above equation will allow us to greatly narrow the list of possible answers:

If the product of two numbers is zero, we are in a special situation. Zero is a special number when using multiplication, because there is only one way that a product of two or more factors can produce a result of zero: one or more of the factors must be zero. This insight is so useful that it has been named the “zero product property”.

The zero product property leads us to break the product up, set each factor equal to zero, and solve from there. This breaks the problem down into a series of simpler equations, one for each factor:

To make use of the “zero product property” in solving a quadratic:

What makes the first of the following equations easier to solve than the second?

The first is easier to solve because:

While the two points above sound somewhat similar, the first applies only to less complex situations like the first example above, while the second applies to any situation… such as the second example above. So, what do “perfect squares” look like? They are the result of squaring a constant or a polynomial, as shown on the left side of the examples below. You will find it very useful to be able to quickly identify the right side of each example below as a perfect square. Do you see any patterns that apply to every right side below? 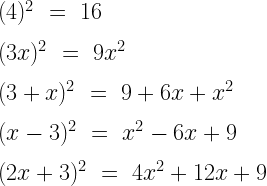 When faced with a quadratic equation, rewriting it as a perfect square trinomial (plus a constant if necessary) allows the perfect square trinomial to be factored into the square of a binomial. This “collapses” the two variable terms into a single variable term, allowing the equation to be solved using linear equation solution skills. While this may take a little longer than factoring and relying on the zero product property, with practice it should become almost as efficient as factoring. This approach is called “completing the square”, and can be used to solve any quadratic equation, even ones that cannot be factored easily.

An example of “completing the square” in action is:

Notice the trinomial in parentheses in the third step above, and how it is re-written as the square of a binomial in the following step. This collapses the two “x” terms into one, making the resulting equation much easier to solve.

For a more detailed exploration of several approaches to “completing the square”, please see this post.

The addition of a squared term to a linear equation dramatically changes its graph, and can make an equation more challenging to solve. Factoring and completing the square are two algebraic procedures for solving quadratic equations. Students will benefit greatly in later math courses from being able to execute them efficiently and confidently.

Each approach relies on a critical underlying concept: factoring on the zero product property, and completing the square on the observation that a factoring a perfect square trinomial results in an expression with only one variable term. In both cases, the resulting equations can then be solved using linear equation solution skills.