One solution is to follow the order of operations (parentheses, exponents, multiplication, division, addition, subtraction) working from left to right in the event of a “tie”. This will always produce the intended result.

However, the order of operations does not provide any guidance about how an expression might be re-arranged without changing the result… which is what algebra is all about. Re-arranging an expression is often useful, as it can make the expression either look simpler, or easier to evaluate without a calculator.

Subtraction As The Addition Of A Negative

Let’s briefly revisit addition, but this time with the full set of integers in mind instead of only the counting numbers. What happens when a positive number is added to a negative number?

This corresponds to saying we wish join five “owned candy bars” with three “owed candy bars”. If I use three of my five owned candy bars to pay off the debt, that will leave me with two candy bars… which is the “difference” between 5 and 3. In other words, subtracting a number is the same as adding the “opposite” number, or the negative of the number.

Turning subtraction into the addition of a negative turns out to be a very useful concept, as it allows us to rewrite any subtraction then use the associative and commutative properties of addition to rearrange the expression:

Notice that all four of the above expressions produce the same -1 as a result. Rearranging has not changed the result now that we have rewritten all subtractions as addition of a negative.

If you wish to rearrange an expression that involves only addition and subtraction (and nothing else), you may do so after changing all subtractions to the addition of the opposite number.

But rewriting things consumes time and ink. It is easier and faster to take this approach: you are welcome to rearrange addition and subtraction as long as you move the sign before each number with it. Note that this is exactly what was done above. If a number does not have a sign before it, you should use a plus sign for it.

You will find the word “term” very handy in algebra. Terms are separated by “+” and “-” signs in an expression. The expression

Revisiting the approach stated above for rewriting expressions, but this time using the word “term”: you are welcome to rearrange addition and subtraction as long as you move the sign before each TERM with it. If there is no sign before a term, use “+”: 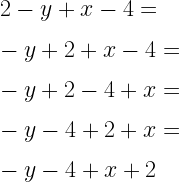 Rearranging expressions can be useful for two reasons: it is a critical step in “simplifying” them (make them shorter and faster to read or evaluate), and it can make them easier to evaluate without resorting to writing instruments or calculators.

Simplifying expressions is a topic that will be covered in detail later, so for now I will show how rearranging can make it easier to do sums and differences in our heads. Rearranging allows us to:

Suppose we have been asked to compute the following:

If we wish to combine “easy pairs” first, we could rearrange things as:

Alternatively, we could first combine all the positive numbers to arrive at our maximum positive value, then compute the remaining differences:

The first two numbers sum to 10, plus the 8 produces 18. The negative total will be -14 less 8, which is -22, less 7, which gets us to -29. Combining the two totals: 18-29 = -11. This approach can be less error-prone because we are able to add a series of absolute values for most of our thinking, and only need to compute one difference: our very last step. (Thanks to Michael Goldenberg for suggesting this approach) .

More approaches than the three I have described are possible, however the above should be enough to make the point: rearranging terms can make it easier to compute in your head accurately. Note that all three approaches described above produced the same final result… as guaranteed by the commutative and associative properties of addition.

The “best” approach will usually be the one that you find most intuitive and reliable. A room full of people might each prefer a slightly different approach to computing the above problem, yet they will all end up with the same result if they avoid making errors.

Algebra provides us with an infinite number of paths to a problem’s solution. Some will be more efficient, others more easily remembered, and others more reliable when doing “mental math”. We each can choose our preferred approach when the time comes.