Algebra is a set of rules that allow us to change the appearance of an expression without changing the quantitative relationship that it represents. Sometimes the changes in appearance are greater than expected, causing us to doubt whether two expressions really do represent the same quantitative relationship.  The ways in which negative differences can be rewritten seem to surprise people until they become accustomed to them.

Consider a difference that is being subtracted:

I can easily understand how a person’s first impression of the bottom expression leads them to assume it is not equal to the top one… but all three expressions are equivalent.

A second situation that builds on the above insight, but uses it in reverse, involves moving a negative sign around in a fraction that has more than one term in either numerator or denominator, or both:

If you now multiply this fraction by one, in the form of negative one over itself, watch what you can make happen:

Note that the differences in both numerator and denominator changed order and therefore sign. The result is therefore is equivalent to the original because dividing one negative by another nullifies the effect of both negatives (as was illustrated when I multiplied by one in the form of negative one over itself).

And finally, a third situation – one which occurs fairly frequently and often confuses people when they have not seen it before. First let’s turn the subtraction of a fraction into the addition of the negative of the fraction: 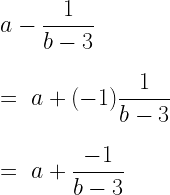 However, in making the above fraction negative, we could have moved the negative sign into the denominator instead of the numerator, then performed that same re-ordering of the difference in parentheses: 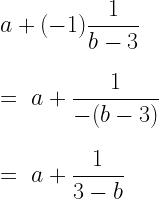 This can often appear in a textbook or someone else’s work this way:

Many people react to the above by wondering how subtraction of a fraction turned into addition… until they notice that a factor that contains a difference, in either numerator or denominator, has changed its order and become the negative of what it used to be. A more complex example of this might be: 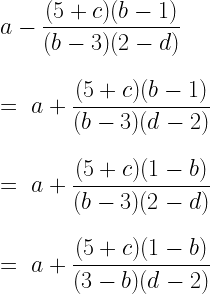 where the last example has three negated factors… the result of which is still the negative of the original fraction. I like to think of the above as “Jedi Algebra Tricks”: useful conveniences which can be confusing if you have not seen them before.