You might start by arbitrarily picking some angle, any angle, such as angle ABC in the image below, and call its measure “1”. All other angles could be

As you consider larger and larger angles, each a multiple of the original angle ABC above, and thinking about the measure of each, you will eventually get to an angle which is so large that it has created a full circle. However, did that last angle end exactly along AB, or did it actually produce an angle greater than a full circle?

In the image above, clearly the next multiple of the original angle will not land on point A, but instead will fall somewhere between points A and C. Wouldn’t it be better to have the angle measure of a full circle be a nice round number? This would make it easier to identify when an angle has grown to a measure greater than a full circle, and might also make it easier to identify common fractions of a circle, such as half and quarter circles. Unfortunately, the chances of this happening are poor when an arbitrary starting angle, such as angle ABC above, is used.

With this idea in mind, lets figure out what a good “base” angle measure might be. If we create an angle measure for a full circle that is evenly divisible by 2, 4, 5, and 8, it would be easy to find the angle measure of many commonly used fractions of a circle.

Measuring many commonly used angles would be pretty easy, and the standard 1 “Anglon” angle could be obtained by dividing a circle into 40 equal parts.

This is probably the sort of thinking that lead to the use of 360 Degrees as the most commonly used angle measure of a full circle today. Note that 360 is exactly nine times the number proposed for “Anglons” above, which makes a one Degree angle equal to exactly one ninth of a one “Anglon” angle, and therefore more practical when describing small differences in angles.

I suspect that the use of 360 Degrees as the angle measure of a circle was probably arrived at by just as arbitrary a process as the one I followed to come up with “Anglons” above. That does not detract from their usefulness or practicality in any way… but there is another commonly used unit of angle measure, one that has a slightly less arbitrary basis.

It would be nice to have an angle measure be a real “measure” of some physical attribute of an angle… instead describing an angle solely as a fraction of a circle. What measurable property of angle could meet this goal?

The sides of an angle can extend to any arbitrary distance, including infinity, and do not tell us anything about how “wide” the angle itself is. However, if we construct a circle (using any radius we wish) using the vertex of the angle as the circle’s center, we can see that the angle intercepts a section of the circle, an “arc”. The larger an angle is, the longer this intercepted arc will be. The arc length provides us with a good angle measure.

To resolve this problem, we can decide to measure all arc lengths at the same (arbitrary) distance from the vertex of the angle, say 1 unit. Or, we can also divide the arc length by the circle’s radius to arrive at an angle measure that does not depend on the radius of the circle used:

This value is called the Radian measure of an angle, and corresponds to the length of the arc intercepted by the sides of the angle at 1 unit away from the vertex of the angle – as you can see in the image above. The unit descriptor “Radian” could therefore perhaps be more fully described as “Units of Arc length per Unit of Radius”, which is a dimensionless quantity, but the term Radian is a bit less long-winded.

The measures of smaller angles can be determined by using the proportion of a 1 unit radius circle’s circumference that they intercept:

Converting between Degrees and Radians

To convert from one angle measure to the other, recall that both angle measures MUST represent the same proportion of a whole circle:

For example, to convert 30 Degrees into Radians: 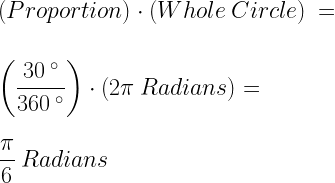 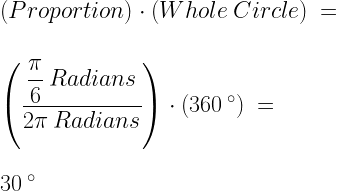 It is useful to be equally comfortable with both the Degree and Radian measures of common angles. Common angle measures in both systems are:

Both Degrees and Radians have their advantages and disadvantages as angle measures.

Angle measures expressed in Degrees have the advantage of often being nice round numbers (30 Degrees or 135 Degrees), whereas angle measurements expressed in Radians frequently have a pesky Pi in them

Angle measures expressed in Radians are easier to convert into arc lengths. Suppose a 15 inch tire on an automobile has just rotated 45 Degrees (otherwise known as

)… how far did the car just travel? If we use the Radian angle measure, we multiply it by the Radius of the tire to get the arc length: