I use a lot of notation when working a math problem. It is familiar to me, comfortable even. So it is all too easy to forget that this same notation can get in the way for others.

Math teachers have many goals for their students, mostly revolving around work and thought habits that help them to both understand the material and solve problems efficiently. They also seldom have as much class time available as they would like.

The result is often more time spent on concept and procedures (the crucial parts) than notation (which they’ll pick up from the way I use it, right?). Yet, I suspect many “typical” algebra errors may result from an insufficient comfort with, or understanding of, notation.

How often do teachers rephrase what notation represents? As I write

on the board, I probably say it as “three X plus five” 98% of the time. Yet it would probably be of greater benefit if I constantly varied the way I described the notation. I could say it alternately as

I should probably vary the way I write problems as well.  Instead of always defaulting to my habitual ways and writing 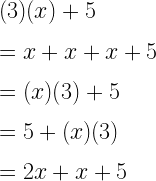 to make the point that all of these are equivalent representations of the same mathematical concept, and that students should feel welcome to use whichever representation makes it easiest for them to understand and model the situation.

After all, the notation we use has been developed over many years – presumably because it is both unambiguous and economical in its use of pencil lead (or ink) and paper. However, a student’s hesitation in interpreting notation is almost guaranteed to get in the way of the concepts we are trying to convey.

As an example, consider sigma notation. Many capable math students seem to stumble over both sigma notation and subscripts when they are first introduced, which makes arithmetic sequences seem like a harder topic than it should.

Students may stumble because new notations are not introduced very often in High School math, so students don’t get much practice adapting to them. On the other hand, troubles could occur because we assume that they internalize both new and old notations more quickly than they actually do.

Notation relies on concepts and visualization to be most effective, even though it often seems to be taught using more of a rule-based approach. If our students’ ability to understand and make use of concepts is greater now than it was when they were first exposed to a notation, perhaps we should spend more time gratuitously reminding students of what the notations we are using represent, even those they supposedly mastered years ago.