Many High School students I have worked with have not spent much time pondering the sequence in which math topics were taught to them. So, it can be interesting to step into the “waaay-back” machine and investigate this question a bit:

What was the very first arithmetic operation you were taught (probably in first grade)? What operation were you taught next? Why did your teacher choose this sequence?

If you followed the usual path, the first operation you learned was addition, and the second subtraction. Addition is the operation that describes things being joined or collected together: if I have three cookies, then two more are given to me, I add the two numbers to determine how many cookies I have. Addition is probably the most frequently used math concept in daily life.

Why was subtraction taught next? It describes things being un-joined, taken apart, or taken away: it “undoes” addition. Addition and subtraction are inverse operations. Each reverses the effect of the other. Each is needed to solve problems involving the other. By now you have undoubtedly used both operations many, many times in the process of manipulating algebraic expressions. However you may not have realized exactly why you were taught to use them this way. As inverses of each other, they are the only means of undoing what the other did.

What operation did you learn next, and how is it related to what you learned earlier?

3 x 5 can be thought of as “three times the size of five” or “three of the number five”: 5 + 5  + 5. This approach is very handy when gaps appear in your memory of the multiplication table. If you do not remember what 7 x 8 is, and you do remember that 8 x 8 = 64, thinking of this problem as repeated addition helps. If you think of 8 x 8 as eight values of eight added together, totaling 64, but you only need seven of them to calculate 7 x 8, subtract one 8 from the answer and you get 56. Done algebraically with equations one step at a time, it looks like: 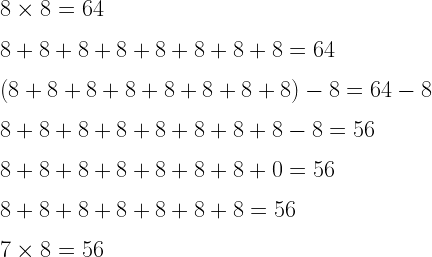 What operation came next, and why?

The problem 12/3 can be thought of as “reverse the effect of making something three times larger and ending up with 12”, which sounds pretty convoluted. That’s why I prefer to think of division as multiplication by the reciprocal: “scale 12 by 1/3”,  or “one third of twelve”. When dividing by a positive integer, division can also be thought of as repeated subtraction: “the number which I can subtract from 12 three times in order to get back to the additive starting point of zero”.

Once Multiplication and Division were introduced, your teachers probably took several years to ensure you were skilled at using them, so you did not see any new operations for a while. What was the next operation you were introduced to?

Exponentiation was next, the operation that models growth or decay.  When an exponent is a positive integer, it can represent repeated multiplication. 3 x 2^5 scales your starting point (3) by a growth factor of two (doubling) over five growth periods. 5^3 can be visualized as 5 x 5 x 5, or 5 x 5 x 5 can be summarized as 5^3.

It is interesting to compare the effects of multiplication and exponentiation:

With each additional power, there will be four times as many sets of four fours. Pretty soon, they will no longer fit on the page. While multiplication stretches or “scales” things, exponentiation grows things… which makes scaling seem puny after a few growth periods.

And the last operation missing here? Roots. Why were they introduced? They are the inverse of exponents, and the tool needed to undo an exponent in order to find the growth factor being used. If an integral root is being sought, you can think of the process as repeated division: the third root of 8 is the number you must divide 8 by three times in order to get back to the multiplicative starting point of one. Exponents are needed to solve problems involving roots, and roots are needed to solve problems involving exponents.

So, just about everything seems to come in pairs: Addition and Subtraction, Multiplication and Division, Powers and Roots. This pattern continues through much of the mathematics you will learn, but also extends to technology: look at the layout of keys on a calculator. Inverse operations usually share the same key or are next to one another: On and Off, Store and Recall, Square and Square Root, Sine and Arcsine, etc.

Why are operations paired this way? Because most of the algebra problems you will be asked to solve will rely on “un-doing” one or more operations or functions until you have a variable all by itself on one side of the equation. And the only way to exactly undo something is to use its inverse.

One last thought. I often like to arrange these pairs of arithmetic operations in a two by three table:

BUT, if you skip a row in the table, things get messy. If you try to jump straight from exponentiation to “repeated-repeated addition”, it gets more complex and easier to make mistakes. Powers and Roots do NOT distribute over Addition or Subtraction… so watch out if you are tempted to “distribute” the square when faced with an expression like (a + b)^2, as you will end up missing at least one term. Instead, if you have an integer as an exponent, write out the product then distribute the factor: 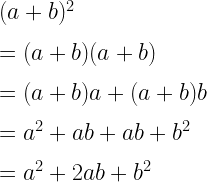 Introducing operations as mutual inverses can be helpful. Reminding students of the relationships between each of these six operations and its predecessors as each new one is introduced can be even more helpful.