please help improve this site's prominence in search results by including a link to this site in appropriate places elsewhere on the internet - perhaps in a response to a math question, or in a comment on a math blog, etc. Thank you!

This post was written in 2010. For my current approach to this topic, which uses transformation equations, please follow this link: Function Transformations: Dilation

This post explores one type of function transformation: “dilation”. If you are not familiar with “translation”, which is a simpler type of transformation, you may wish to read Function Translations: How to recognize and analyze them first.

A function has been “dilated” (note the spelling… it is not spelled or pronounced “dialated”) when it has been stretched away from an axis or compressed toward an axis.

Imagine a graph that has been drawn on elastic graph paper, and fastened to a solid surface along one of the axes. Now grasp the elastic paper with both hands, one hand on each side of the axis that is fixed to the surface, and pull both sides of the paper away from the axis. Doing so “dilates” the graph, causing all points to move away from the axis to a multiple of their original distance from the axis. As an example of this, consider the following graph:

The origin is a point shared by both lines, and it is useful to note that the dashed line is still “twice as far from the x-axis” at the origin, because

. Any point that satisfies a function definition and lies on the x-axis will not move when the function is dilated vertically.

There are two ways we can describe the relationship between the two functions graphed above. Either:

Both statements describe the graph accurately. However, in general the function definition which is simplest (in algebraic terms) will be considered the “parent” function, with the more complex-looking definition being described as a dilation of the simpler function.

(graphed as the dashed curve below), is easier to analyze if you perceive it as related to a simpler “parent” function:

(graphed as the solid curve below) which has been both dilated and translated:

The blue point at the origin, which is the vertex of the solid parabola, had its y-coordinate (0) multiplied by three then had five added to it:

It was then shifted one unit to the right, causing its x-coordinate to change from 0 to 1. So, the “parent” vertex that was at the origin is located at (1, 5) in the transformed function.

The green point on the solid parabola (2, 4) also had its y-coordinate (4) multiplied by three and had five added to it:

It was then shifted one unit to the right, just as the vertex was, and that point (3 ,17) satisfies the equation of the dashed parabola, g(x).

Visualizing functions as translations and dilations of a simpler “parent function” can make complex-looking equations much easier to interpret.

Consider the solid parabola below, which represents the function:

Note that we could easily write this second function in terms of the first:

By defining g(x) this way, we are explicitly stating that every y-coordinate produced by g(x) will be three times the corresponding y-coordinate on f(x). In other words, g(x) is f(x) dilated vertically by a factor of three.

Every point on the graph of g(x) below (the upper, dotted, parabola) is three times farther away from the x-axis than the corresponding point on f(x):

f(x) passes through the point (2,8). Since we are examining vertical dilations, let’s keep the x-coordinate the same and ask “What will g(2) be?” The original f(x) will be stretched vertically by a factor of three vertically everywhere, including at x=2, so (2,8) becomes (2,24). You can verify for yourself that (2,24) satisfies the above equation for g(x).

This process works for any function.

dilates f(x) vertically by a factor of “a”.

Let’s apply this idea to a trigonometric function:

Based on the explanation in the previous paragraph, we can conclude that

represents a vertical dilation by -5 of

If we apply this approach to another type function

you can see that we can analyze it the same way:

dilated vertically by a factor of k becomes:

Applying this approach to an even more complex situation:

The parent function in this case is

Note that every instance of “x” in f(x) has had (x-1) substituted for it, which translates f(x) horizontally by +1. Then this result was multiplied by 3, causing a vertical dilation by a factor of 3:

The original vertical translation and y-intercept of +1 ( the constant term in the definition of f(x) ) is also affected by the vertical dilation, and becomes +3 in g(x)… three times the distance from the x-axis that it was originally.

Let’s return to the graph of:

Once again, we can describe g(x) more compactly if we do so using f(x), however this time the dilation factor is multiplied by the function’s “input variable” instead of its “result” (as was done to produce a vertical dilation):

Note that f(x) passes through the point (3,13). Since we are thinking about horizontal dilations, let’s ask “What value must ‘x’ have if g(x) is to produce this same output of 13?”

Since (3,13) moved to (1,13), multiplying every “x” in f(x) by 3 has compressed the graph horizontally, with each point being moved to one third of its previous distance from the y-axis.

If multiplying the result of a function by a factor causes a vertical dilation by the same factor, why does multiplying the input variable by a factor cause a horizontal dilation by the reciprocal of that factor? To ask the question another way, if using a coefficient greater than one expands things vertically, why does it shrink things horizontally? This difference in effect seems counter-intuitive at first glance. The difference occurs because vertical dilations occur when we scale the output of a function, whereas horizontal dilations occur when we scale the input of a function.

This process works for any function. Anytime the input of the “parent function” is multiplied by a value, the parent function is being horizontally dilated. If

is the parent function, then

represents a horizontal dilation of the parent function by a factor of “1/a”.

Apply this idea to a slightly more complex situation:

In other words, the period of f(x) is

Horizontal dilations of a quadratic function look a bit more complex at first, until you become accustomed to the pattern you are looking for:

for the new equation to represent a horizontal dilation of the parent by a factor of 2.

Applying this approach to a fractional situation:

represents a horizontal dilation by a factor of 1/k of

In contemplating both vertical and horizontal dilations, you may have realized that the graphs of some functions, such as 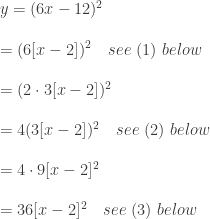 This example demonstrates that some functions can transformed to the same end result by either a horizontal dilation, a vertical dilation, or a combination of both. In the example above, the following three sets of dilations and translations of the parent function

The “normal” way of describing a combination of dilations and translations is to convert all dilations into vertical dilations by manipulating the expression so that the independent variable has a coefficient of one:

If you were not interested in the vertical dilation, but only in the horizontal translation, you could solve the independent variable expression (before applying any exponent) for zero:

which tells us that the “parent function” has been translated horizontally by +2 after all dilations have been carried out.

Dilation About Lines Away From An Axis

In some situations it will be useful to dilate a function relative to a horizontal or vertical line other than the axis.  To achieve this, we need to:

Suppose we wish to dilate a function f(x) vertically by a factor of 3 about the line y=2. The above steps produce the following for the function f(x):

Translate f(x) down 2, so that the line about which we wish to dilate is moved onto the x-axis:

Dilate the translated function vertically by a factor of 3:

Now “undo” the original vertical translation by translating it back up 2:

If you graph both f(x) and g(x) on the same graph, as shown above, you will note that the two graphs intersect one another at the line y=2, which is the line about which we dilated f(x). Those are the only two points on the graph of f(x) that remain unchanged by the dilation.

This same process can be followed to create horizontal dilations about some vertical line: translate the function horizontally, then dilate it, then translate the result back to where it started.

If you would like to play around with vertical dilations and see how they work, try any of the following Geogebra applets.  The only one that lets you play with horizontal dilations is the last one (Sine Function):
– Quadratic function in vertex form
– Exponential function
– Sine function

You may also be interested in a topic based on the ideas in this post:
– Using Corresponding Points to Determine Dilation Factors and Translation Amounts

Math teacher, substitute teacher, and tutor (along with other avocations) View all posts by Whit Ford

6 thoughts on “Function Dilations: How to recognize and analyze them”